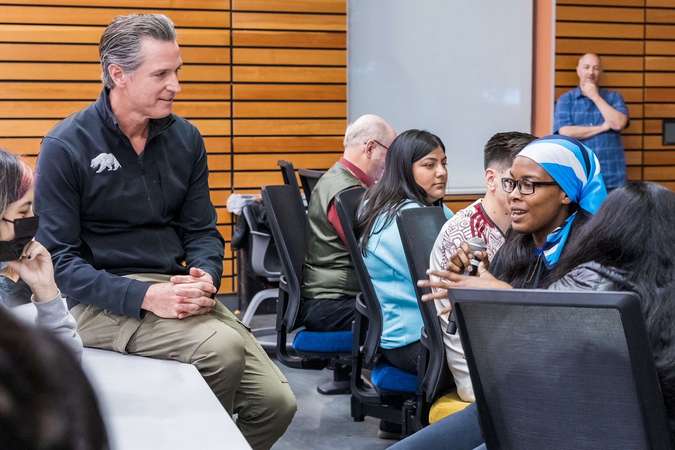 A day before the midterm election, Gov. Gavin Newsom made a surprise visit
to a political science class at UC Merced.

Newsom was invited by Assemblymember Adam Gray, who co-teaches the class
and provides insight about how government, specifically the California
State Legislature, operates. As part of the course, students take on
various roles, including state senators, lobbyists and the media, as well
as a candidate running for governor.

After a brief history of his own political journey, Newsom spoke to the
class about the importance of relationships and working across the aisle,
something he said has been lost with the increased political polarization
in the United States.

“For all the power politics, for all the decision making and for all of
these issues, it still matters,” he said. “There are those calls that could
quite literally go either way. And when someone’s developed trust, which is
the coin of the realm … it is the difference maker.”

Among the dignitaries who joined students in the audience were UC Merced
Chancellor Juan Sánchez Muñoz, Merced Mayor Matthew Serratto and Merced
County Supervisor Josh Pedrozo. The governor spent the majority of his time
in the classroom listening to students and what they have come to learn
about how government operates.

"You need to make a point in order to make a difference," one student told
him.

Speaking to the media, Newsom pointed to the timing of his visit, which
came the day before he was elected to a second term. He said he enjoyed
talking to the students and learning their perspectives.

“You see these remarkably talented young folks that have a quality of
imagination, and they haven’t gotten the message that our best days are
behind us. It’s the opposite. They’re still bright-eyed and optimistic. It
warms the heart.”

Prior to the lecture, Muñoz and representatives from the university’s
Center for Analytic Political Engagement (CAPE) had an informal meeting
with Newsom, during which he was briefed on the research and scholarship
underway at the new center. Billed as a focal point for scholars, students
and community leaders in the San Joaquin Valley, CAPE was made possible in
large part thanks to Gray’s efforts to include it in the 2021 Budget Act.
Newsom signed the act into law last year.

Austyn Smith Jones, managing director for CAPE, said though the news of
Newsom’s visit came as a surprise, the organization made all the
arrangements necessary to make it happen.

“The whole course is about putting yourself in the position of a lawmaker
or one of the other roles,” she said. “Hearing a first-hand account about
how to get things done was really exciting for the students.”

Those who attended the surprise guest lecture were still talking about the
experience the following day at a CAPE election returns party, Jones said.
Muñoz was especially grateful for the time the governor spent at UC Merced
and for providing the political science students with a memorable
experience.

“We appreciate Governor Newsom taking the time to share with our students
some of the very real experiences of how state government functions,” the
chancellor said. “His visit to UC Merced the day before his re-election
speaks volumes about how important the university and the broader Central
Valley area is to California.”