"Segregation by Design" Hits the Shelves

Prof. Jessica Trounstine's new book "Segregation by Design: Local Politics and Inequality in American Cities" has just been published by Cambridge University Press. The book represents a major contribution to our understanding of local American politics, inequality, and segregation. A huge congratulations to Prof. Trounstine!

The book explains the political underpinnings of residential segregation and details the ways in which segregation produces polarization and inequality. Since the early twentieth century, cities have used their power of land use control to determine the location and availability of housing, transportation routes, amenities (such as parks), and negative land uses (such as landfills). The result has been segregation – first within cities and more recently between them, as suburbs arose. Documenting changing patterns of segregation and their political drivers, I argue that city governments have pursued these policies to enhance the wealth, resources, and public goods of white property owners at the expense of people of color and the poor. Local democracy has not functioned to represent all residents. The result has been unequal access to fundamental local services – from schools, to safe neighborhoods, to clean water. The book draws on more than 100 years of quantitative and qualitative data from thousands of American cities to provide detailed evidence of these processes and outcomes.

To learn more about the book, you can listen to Prof. Trounstine discussing the book on Valley Public Radio and the New Books Network Political Science podcast. 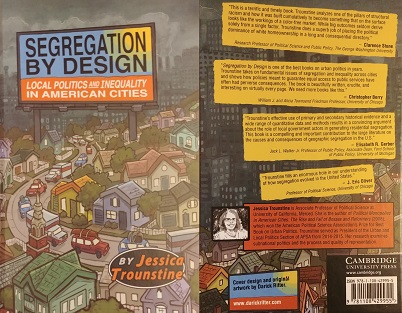